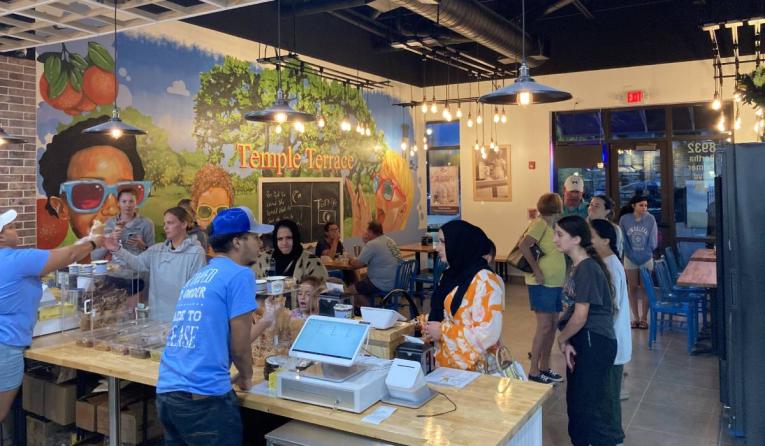 Abbott’s Frozen Custard, the nation’s oldest frozen ice cream franchise, has opened a new franchise in Temple Terrace, Fla., northeast of Tampa. Local owner-operators Gina Strazzabosco and Joseph Kampff expect this to be the first of several Abbott locations they will open in and around the Tampa area.

Abbott’s, a family business founded by Arthur Abbott in 1902 and rooted in Rochester, New York since 1926, is one of the nation’s fastest growing ice cream franchises. Abbott’s secret family recipe is one of the secrets to the company’s success. Freshly prepared daily in small batches, each Abbott location offers a wide variety of flavors. Beyond cones and platters, customers can enjoy milkshakes, sundaes and more.

Another secret to success is the fanatical following of the business. In fact, most of the company’s 18 franchise owners have strong ties to the Rochester area and a love for the Abbott brand that they have carried with them for many years. In this case, Strazzabosco grew up in Rochester and loved going to Abbott all his life. She has fond memories of her favorite black raspberry pastry cream. More importantly, she saw how Abbott contributed positively to the community – an experience Abbott has since trademarked as “Happily Ever After.”

When Strazzabosco met Kampff and moved to Tampa, where Kampff is from, they wanted to create a similar destination where people could gather and spend time together. So they chose to open an Abbott’s Frozen Custard franchise. Strazzabosco also works as a team leader for Feeding Tampa Bay, the city’s largest food pantry, while Kampff is a former college professor and now devotes his time to managing Abbott’s new stand.

“Gina and Joseph’s story is like that of so many of our owners,” says Brenden Drew, Vice President of Business Development. “They loved the Abbott experience so much as children and young adults that they want to bring that same fun and feeling to the communities where they now live. It is a deep passion for the brand that contributes to the success of our franchisees.

Abbott’s Frozen Custard currently has 37 stalls and has signed franchise deals – including numerous multi-unit deals – that will grow it to more than 100 over the next few years.

The news and information presented in this press release have not been corroborated by RSQFood News Media or Journalistic, Inc.