At Todo, industry veteran Marco Frattaroli’s new restaurant, you can order your tortilla toppings by the pound 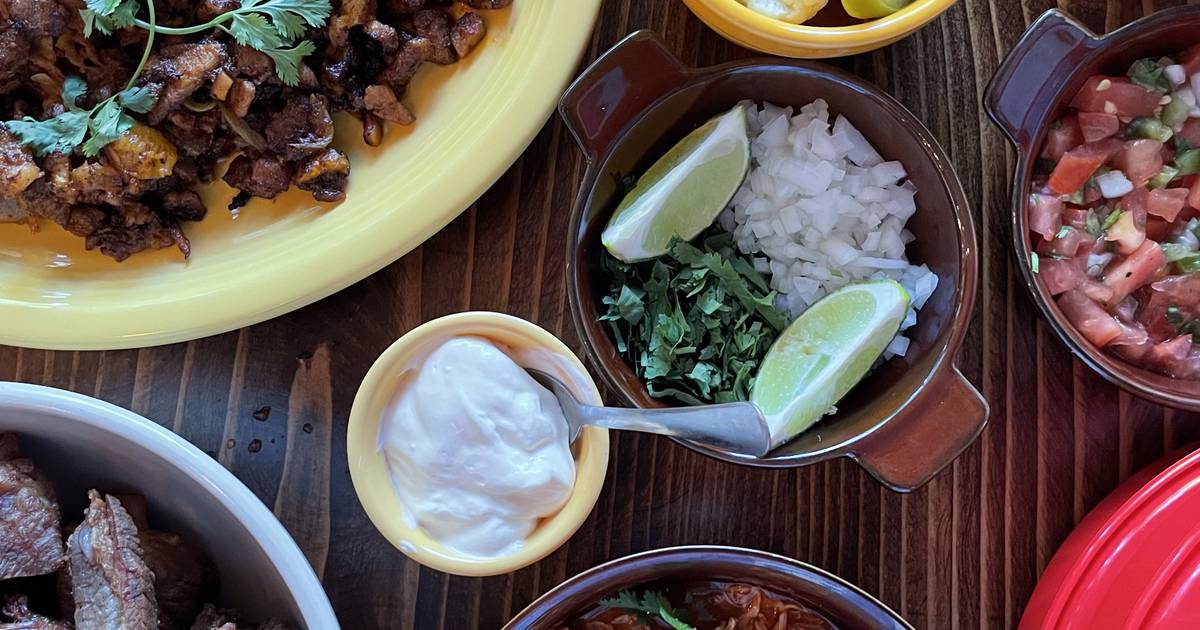 Build-Your-Own-Taco Night is a weekly staple for many families, and it’s easy to see why. There’s something so playful and satisfying about creatively building and consuming the ever-popular portable Mexican classic.

That fun, family-friendly feeling is a big part of the dining experience at Todo, the new taco corner that now occupies the former Blackbird Pizza space on Southeast Hawthorne Boulevard. Inside the sprawling, colorful dining room, much of it hand-built by veteran restaurant owner Marco Frattaroli (Cibo, Bastas), diners can choose between half-pound or one-pound plates. full pound of taco fillings and toss them randomly with various toppings on soft doughs. corn tortillas or crispy tostadas.

The smash hit is the pastor de trompo ($16, $29), adobada-marinated pork that slowly turns on a spit and roasts with pineapple and onion, resulting in a sweet-edged plate. , juicy and crispy. It’s spectacular. Another highlight is the super tender sliced ​​asada ($25, $42) marinated in citrus and achiote. The most interactive topping of the bunch is the carnitas de costilla ($22, $33), individual candied pork ribs that can be wrapped in a tortilla and easily slid off the bone. It’s a creamy indulgence that I would recommend chopping with the spicy, sour crunch of homemade carrot pickles.

On the evening of our visit, specialties included a boiled beef tongue with tofu and a delicious cochinita pibil – pork loaded with warming spices, which Frattaroli compares to bolognese, which is braised in banana leaves and served with onions. marinated reds.

The breaded local redfish ($17, $27) is light and fresh, and pairs well with shredded cabbage and tangy cotija cheese. The suadero ($24, $39), a garlicky simmered beef brisket similar to beef brisket, is nice but doesn’t really stand out. The only real duds are the very similar tinga de pollo ($14, $25) and the vegan picadillo ($13, $22), both of which have a sweet, watery tomato flavor. The latter is particularly disappointing. Being the only vegetarian option, the hodgepodge of undercooked vegetables and soy protein seems like an afterthought. In general, the restaurant is not yet a vegetarian or vegan destination (even the rice is cooked in chicken broth), so I can only hope that the vegetables soon receive the same care and attention as the meats .

One meatless bite that will satisfy everyone, however, is the guacamole, which is probably the best I’ve had in Portland – salty and creamy, with big chunks of avocado, onion and tomato. Salsas that stand out include a creamy salsa verde and a very spicy and smoky salsa macha.

There are a handful of smaller ready meals for those who find taco assembly too taxing. The aguachile de pescado ($14), a cooked redfish ceviche, has a bright lime and cucumber flavor but an unappealing presentation, with most elements clumsily cut into uneven pieces. The trendy quesabirria street tacos ($12 for three) are served red hot for maximum gooey cheese potential. The accompanying consommé for dipping is rich and comforting, and the birria is preferable as part of this cohesive appetizer rather than flying solo as a taco filling.

Flan Napolitano ($7) is the standout dessert, with a burnished caramel top and a silky texture. But beyond that, you’d do well to stick to taco kits and avoid one last sweet dish. Arroz con leche ($5) is a watery, undercooked rice pudding sprinkled with cinnamon in a way that brought me back to the decade-old viral food challenge. The tres leches ($8) has a thick, cheesecake-like filling, rather than the usual moist cake sponginess, and is inexplicably topped with Amarena cherries. The Cinnamon Chili Chocolate Ice Cream ($8), made in partnership with Pinolo Gelato, is a surprising gimmick that quickly gets tiresome.

Superior sweet options can be found on the cocktail list, as the juices for all drinks are homemade. The exceptional margarita ($10) is tangy, refreshing and balanced. The Verde/Rojo ($11), with tequila, lime, tomatillo and watermelon, evokes the feeling of eating fruit gummies lying in the grass at a picnic. Jorge’s Retreat ($13), made with mezcal, lime and orange, deserves to be crowned Portland’s “It Girl Cocktail,” thanks in part to its perfect Tajín rim and mini watermelon ice cream. for dipping, swirling and snacking. It’s a great way to wrap up a dinner with friends at a restaurant where, despite some repetitiveness and under-seasoning, the mostly strong flavors and techniques of the targeted offerings shine.