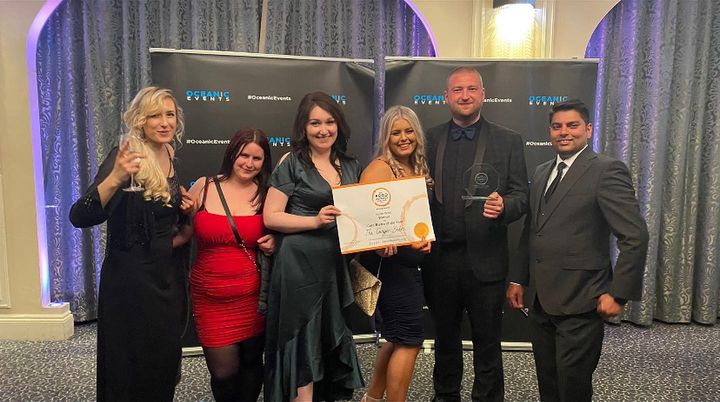 A Fulwood bistro team celebrated after the Food Awards 2022 named it both the North West’s ‘Best Cafe Bistro’ and the best in England.

The awards coordinators contacted The Ginger Bistro just over a month ago to let the team know they had been nominated for an award and chosen as finalists for Best Cafe/Bistro in the Northwest.

They invited them to attend the awards ceremony on Monday, June 6, along with the other nominees.

Soji, the owner of Ginger Bistro in Fulwood, decided to make the event a celebration for the whole team and announced that he would be closing the restaurant so that everyone could attend, with staff dressing up and turning up. in Manchester.

General manager James said: “When we got there, we had the opportunity to meet other finalists from across the country.

“The event was well organized and coordinated, and many awards were announced. We had to wait after the meal for our category.

“We won the prize for the North West, and we are thrilled, but then, once all the other winners from the region were announced, the big winner for England was announced, and that was The Ginger Bistro.

“It was an emotional moment for the team as everyone worked so hard to bring the restaurant to where it is now.”

James said the bistro has undergone many changes that have impacted the restaurant over the past six months.

The manager said he was proud of the way the team overcame challenges and maintained their professionalism.

James said: “Nothing is perfect all the time and the hospitality industry is hard to work with, but the team at Ginger Bistro is strong and we always support each other.

“Olivia, our executive assistant, worked tirelessly to train the team, organize staffing and redesign the menus.

“I’m still confident to leave the restaurant management to her, and she brings her own vision and touch to the restaurant’s ambiance and service.”

“She’s a great leader, and customers and staff love her.”

Chef Norbert and his team strive to improve and change the food for the specials and à la carte menus, with the small kitchen team “consistently preparing incredible dishes every time”.

James said: “Without them, the work of the dining team would be extremely difficult and the restaurant would not function.

“The standard maintained by the team in their dedication to customer service and The Ginger Bistro is exceptional.

“They make sure customers have a good time and feel welcome, with lots of fun on both sides – the repeat custom we receive is a testament to the work they do every day.”

Read more: Arts and Food Festival at the Intact Center for the Queen’s Jubilee

They said being named the overall winner of Best Cafe/Bistro in England was ‘one of the best things that could have happened to us’.