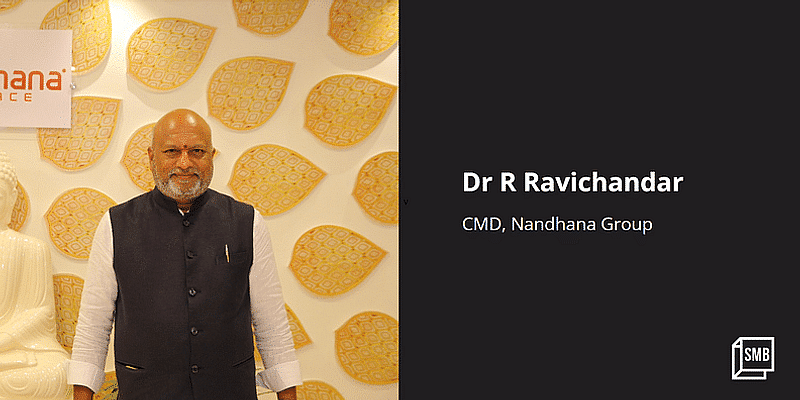 Dr. R Ravichandar came to Bengaluru in 1979 to study. He had left his hometown – a small district called Sholinghur, near Chittoor, Andhra Pradesh – in hopes of making it big in the city.

After finishing his studies, Ravichandar did odd jobs for a few years, including that of a bank clerk. However, he was unhappy with the pace at which life was progressing and wanted to try something else.

This hunger (pun unintentionally) led to him taking a managerial position at a restaurant called Kanishka in 1983. Ravichandar’s move to Kanishka proved to be a game changer and is also responsible for building the foundations of its success in the industry.

While closely monitoring the daily operation of the point of sale, he developed a passion for gastronomy and entrepreneurship. Very quickly, he realized that becoming a food entrepreneur was his ikigai– a Japanese concept for its raison d’être.

He quit his job in 1987 and decided to start a business with four of his friends. Together they invested Rs 6 lakh to open a restaurant called Suhasini. The restaurant was launched with great enthusiasm but failed to ring the cash registers. The lukewarm response spooked the other four investors.

“The partners weren’t ready to invest more money,” he says.

A year later, in 1988, Ravichandar hit rock bottom when the restaurant finally had to be closed. “One of these days I was feeling really bad so I went to see a movie at the Pallavi theatre.”

The movie was Manathil Uruthi Vendim. Ravichandar says the character of Suhasini – who is a nurse, divorced and sole breadwinner for her family – inspired her to pursue her passion. The film charts her journey as she navigates through various struggles for the sake of her family.

“The character of Suhasini inspired me a lot. I told myself that I can’t give up. I need to believe in myself and move forward for me and my family.

It seemed the dust had finally settled as Ravichandar prepared to launch the second leg of his entrepreneurial journey. At that time, he hadn’t foreseen the kind of success this business would be.

Ravichandar says the main idea behind starting his second business, then called Nandini, was to bring authentic cuisine from Andhra Pradesh to Bengaluru. He opened the first outlet in Rajajinagar locality and then opened two other outlets in Koramangala and Indiranagar between 1989 and 1997.

In 1997, he changed the company name from Nandini to Nandhana which means “daughter” in Sanskrit. It was an ode to his daughters, Shwetha and Ramya Ravi, both play an active role in business today.

Nandhana outlets have become famous for their authentic Andhra dishes including Chicken Kshatriya, Sholay Kebab, Bamboo Chicken, Carrot 65, etc. From three, the number of points of sale has increased to 23; of which 22 are located in Bangalore and one in Chennai.

Nandhana held firm despite competition from restaurants such as Nagarjuna, Empire Restaurant, Shiro, Koshy’s, etc. He also adds that it typically takes two or three years for each outlet’s business to break even.

In 2006 Ravichandar expanded the group when he saw an opportunity in the hotel space. “We’ve seen a trend of people traveling a lot for business.” This is how the hotel segment of the Group was born.

Each hotel, he explains, has around 260 rooms and the cost varies between Rs 3,000 and Rs 5,000. They have focused on people traveling for work as their target customers.

The hospitality industry went through a tough time when the COVID-19 pandemic hit India.

It was a very stressful time, Ravichandar recalls, adding that restaurant business dropped nearly 70% in FY21. He further adds that online deliveries saved him that year. . “We partnered with Swiggy and Zomato, which contributed about 30% of revenue.”

The company which recorded Rs 91 crore in FY20 went down to Rs 68 crore in FY21. Its profit also dropped from Rs 2 crore to Rs 54 lakh in these two years.

As online was the only mode of doing business, it helped the company pay staff and also support some rental expenses.

Today, with COVID-19 still around, social distancing anxiety has diminished. Ravichandar says he is looking forward to this year and plans to open five more stores in Bengaluru and Chennai.

Moreover, just before the pandemic, it was close to hitting Rs 100 crore. So, when asked what his plans are for the next 12 to 18 months, he jokes, “Achieving Rs 100 crore revenue.