“I have always been a man of action” – meet Brian Danclair 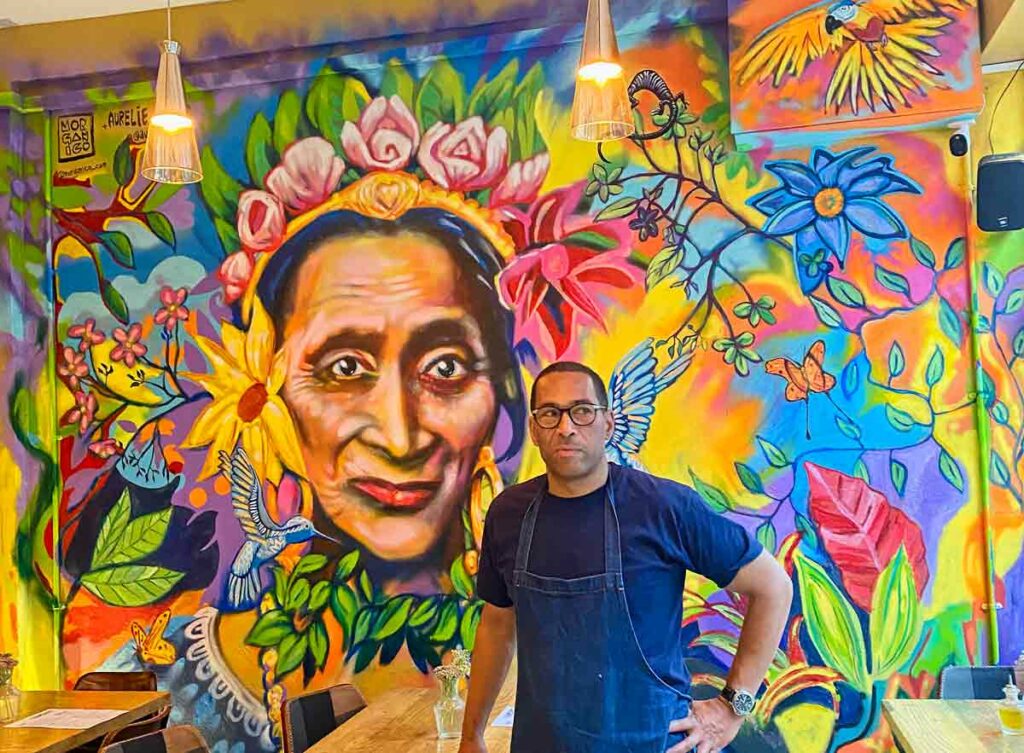 
Simone richardson meets the widely traveled Brian Danclair, who cooked at the Ritz and Dogstar before creating Fish, Wings & Tings in Brixton Village and now his new business, Danclair’s

“I was born in Trinidad and Tobago and was raised by my grandparents, Valentina and Carlton Cabellero,” says Brian Danclair.

“I spent 19 years in an area called Diego Martin, Woodbrook and Belmont in Port of Spain, the capital of Trinidad, before migrating to the United States.”

He went to Washington DC to get a degree, but his path changed.

“I went to a Catholic boys’ school when I was a teenager, then I went to Washington DC where I spent 11 years.

“I went to do a degree in business management, but I never finished, because I felt that education wasn’t for me – always going to a classroom – and because I didn’t want to not get a job in an office.

“I knew that at some point I would own my own business and love to cook,” he says.

“I grew up in Trinidad and Tobago, my hobby was meeting with family and friends and cooking.

“I loved cooking – by the beaches, by the rivers. Catch crabs, river crabs and curry. Hunt wild animals, including deer.

His love of cooking moved with him to Washington DC.

“When I was in school in Washington DC, I started working in a pancake restaurant for a Jew and his French wife.

“They really appreciated me to the point that I looked after their children when they left.

“I worked with them for a year in the pancake restaurant and had a lot of responsibilities. I knew I had a natural gift for it.

“They were good to me – and I was good to them. I worked hard for them and learned a lot. It opened my eyes to restaurants.

“Then I befriended a guy called Yannick Can who was like one of the Michelin starred chefs in Washington DC.

“He saw me cooking, and he said, ‘Look, don’t waste your time, come work with me.’

“When I was working with him, he had a restaurant called Bistro Provence and it opened my eyes and my love of Provençal cuisine.

“It’s amazing food. He had a team of stars. People from Italy, France and Israel.

But, he says, “it wasn’t really for me because the system was set up differently and I really wanted to start my own business.

“So I also cooked personally for ambassadors and celebrities. “

Brian made South Norwood his home for himself and his family.

It has been said that most chefs don’t cook once at home, but despite cooking all day long, Brian confirms that he still enjoys cooking for Ira Contreras, his Venezuelan wife and children – his son Daniel at the university and her 14-year-old daughter Hannah, who “loves to play the piano”.

Brian’s grandmother has passed away at just over 100 and his grandfather is still alive in Trinidad – Brian is unsure of his age “like he doesn’t say!” “

It seems Brian brought the beautiful country of Trinidad and Tobago with himself in food and in person.

He even faced London lockdown, despite “lack of cooking and socializing”.

His positivity is impressive. “We are containment survivors,” he said. “I bought a property, did some work on it, and rented it out during the foreclosure so I stayed active.”

Brian first worked in Brixton at his own cafe called MOCA (MOdern CAribbean) set up above The Dogstar “when Brixton was rough”.

“I know Brixton’s nervousness,” he said. “I appreciate it. I love the people here and the people know me.

“I always want to be an example to the people here.

“You can come from foreign countries and work hard and do it. This is proof of that, ”he says in his new business, that of Danclair.

“I love going to the Ritzy, the nightlife.

“Here, for me, it’s a process of bringing together cultures.

“Everyone has a drink together, laughs together. If you go to Chelsea, you won’t see this.

Brian loves the peace of mind that comes from cooking. It is also when he does his thinking.

“I love to cook anything. Then I can start to think. I am more relaxed when I cook. I can analyze things much better. Not just thinking about the food. Think about anything. How to progress ”

Be sure to head to Brian’s lovely spots in Brixton Village which are worth a visit for the warmth of the atmosphere and the food.

Fish Wings & Tings opened in 2012, and the new Danclair’s has been open for just over a month.