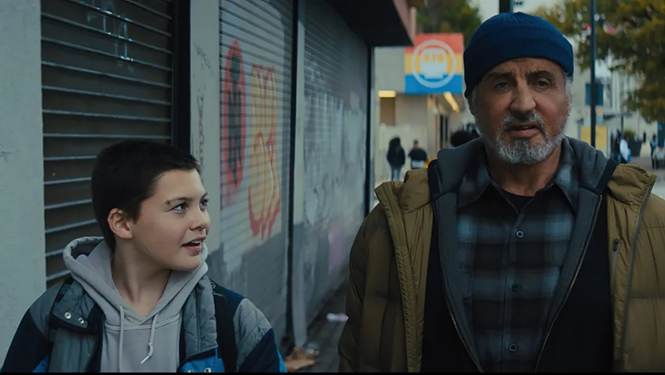 Perhaps the Sundance movie equivalent of “comfort food” is a drama where the narrative bones are solid, the central performances are gripping, and the sociopolitical subtext is right there in the text. Director Abi Damaris Corbin, who co-wrote the screenplay with Kwame Kwei-Armah, tells the factual story of Brian Brown Easley (John Boyega), an Iraq Marine veteran with mental health issues who owns a bank in Marietta , Ga., entirely to draw attention to the fact that his VA disability check was garnished. There’s little set-up or backtracking to the structure of the story, which focuses almost entirely on Easley with his two bank clerk hostages (Nicole Beharie and Selenis Leyva) and police activity at the outsiders, including hostage negotiator Eli Bernard (Michael K. Williams, in his final on-screen performance). The breakup is clearly at its best when Easley and Bernard are in communication, with the volatile Easley finding enough moments of lucidity to understand when the negotiator’s tactics – however sincere in their attempts to avoid bloodshed – are partly manipulation. And it’s just a pleasure to be around such exceptional actors, including Beharie as a bank manager, whose version of Stockholm Syndrome is not wanting his son to see another black man killed. by the police. A detour involving Easley’s phone conversation with a local news producer (Connie Britton) adds little to the story, and there’s nothing revolutionary about the depiction of veterans abandoned by the system (although Corbin uses a great shot of a VA office full of people waiting to be heard). Everything works, and sometimes “works” is enough. Available August 26 in theaters. (R)

Time for me **1/2
One of the side effects of pretty much every mid-budget movie sent to streaming services is that the kind of movie that might have seemed like a drag in a theater is a little easier to enjoy when you’re sitting on your couch. Kevin Hart plays Sonny Fisher, a stay-at-home dad with two kids, a successful wife (Regina Hall), and a growing concern that he doesn’t have a life of his own. When his wife takes the kids on spring break, Sonny gets the chance to reconnect with his childhood best friend Huck (Mark Wahlberg), a big personality whose birthday parties are always a little over the top. Writer/director John Hamburg (Why Him?) delivers the kind of storyline built on a normal guy under the pressure of growing madness, except the craziest madness comes too soon and leaves little consequence; somehow, Sonny’s mutilation by a lion doesn’t even inspire a flinch when everyone slaps him across the back later that same night. And it’s from the line of indulgent comedies that stop dead in their tracks for a game cameo (in this case, musician Seal). But while it’s not as inspired as a “one night crazy” caper like something like game night, Hart has honed the kind of Everyman character he plays here, and the supporting cast provides enough energy to make up for Wahlberg’s underdeveloped arrested teenager. You may not finish it overnight, but you will. Available August 26 via Netflix. (R)

Samaritan ***
If you’ve forgotten what a superhero movie looked like before CGI and the MCU, here’s a fun and decidedly retro throwback to the 90s. In a decaying place called Granite City, 13-year-old Sam (Javon Walton) is fascinated by the possibility that a long-lost and presumed dead costumed hero called Samaritan is still alive. Then he witnesses the unlikely physical exploits of his elderly neighbor Joe (Sylvester Stallone) and becomes convinced that Joe is a Samaritan, which is desperately needed when a crime boss (Pilou Asbaek) tries to take over the role of the old enemy of Samaritan, Nemesis. Director Julius Avery begins with an excellent “original” prologue in old-school comic book design, and maintains that vibe throughout the action, as the action involves nothing more whimsical than gunfire, fistfights and sometimes an overturned car. And the central couple is solid, with Stallone embracing the role of gruff, reluctant mentor and Walton providing the fiery energy. There’s a bit of a missed opportunity in Bragi F. Schut’s script, which teases with the idea that superheroes are soldiers of the status quo, while villains are the real activists of the underdog, but that notion is confused and ultimately rejected. Still, it’s a nice moment to watch a story about a hero from 25 years ago told in a way that might have been told 25 years ago, when the villains would be dispatched with a tongue-in-cheek tagline like “enjoy -you well”. Available August 26 via Amazon Prime. (PG-13)

The territory ***
“Both sides” has (understandably) become a buzzword for media coverage that fails to recognize that parties to a political or cultural clash are not equally guilty; here’s a story that takes the opportunity to effectively present “both sides”. Director Alex Pritz ventures into the Amazon rainforest of Brazil, where the indigenous Uru-eu-wau-wau people find themselves existentially threatened by the encroachment of agricultural settlers, even more so under the leadership of Brazilian President Jair Bolsonaro, who has removes the protection of native tribes as part of his campaign. Pritz is clearly quite sympathetic to the Uru-eu-wau-wau – including their new young leader, Bitaté – as well as an indigenous rights/environmental activist named Neidinha who finds herself and her family threatened, because of his job. But the filmmaker also visits would-be settlers, expressing their sense that owning land of their own is their only way out of perpetual poverty; in a way, it’s a perfect portrait of how demagogues pit the poorer against the better off as the cause of their problems. The environmental impact is certainly eye-catching, including insect insertion shots that clearly show how life is threatened by attacks on the rainforest. As the Uru-eu-wau-wau begin to take up the defense of their land in the face of government apathy, it is clear not only what is at stake for them, but also why the “bad guys” of this history – who claim they “just want what we deserve” – ​​don’t think of yourself that way. Available August 26 at Broadway Center Cinemas. (NR)