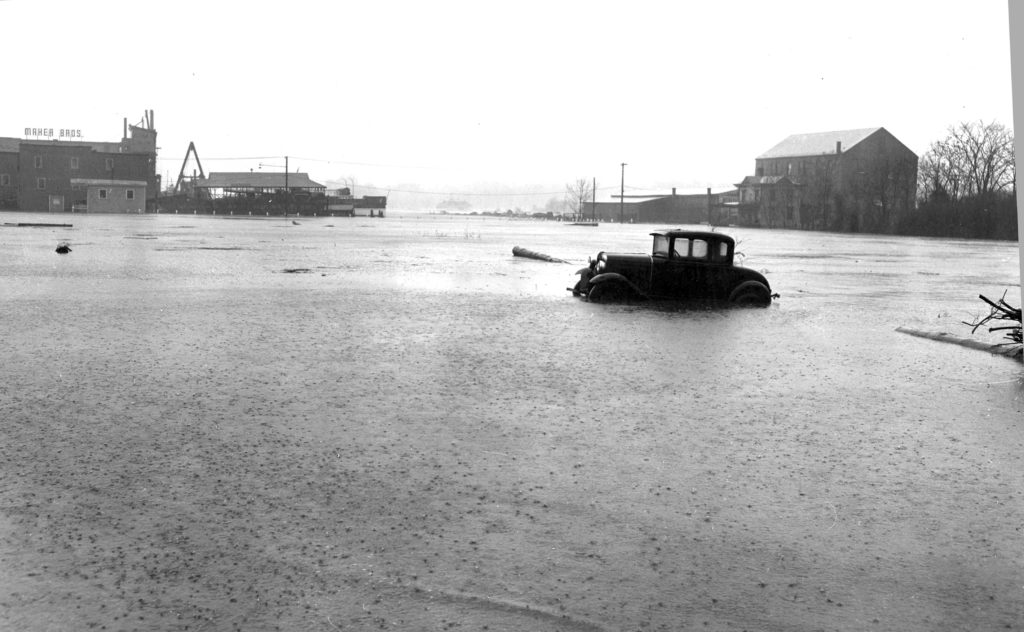 The 1938 unnamed hurricane is believed to be the first major hurricane to hit New England since 1869. It is certainly one of the most powerful and destructive hurricanes of the 20th century. Moving at 47 miles per hour, its center made landfall at astronomical high tide and fed fourteen to eighteen foot storm tides on the Connecticut coast. Also, in 1938, there were no advanced weather technologies such as radar, radio buoys, or satellite imagery to warn residents of an impending hurricane.

Fourteen-year-old Paul Palmer, living on Willowmere Avenue at the time, experienced this storm firsthand. Her vivid memories were told to Barbara Ornstein of the Oral History Project in 1975.

On September 21, 1938, Paul and his classmates were expelled from school at noon because heavy rains had been falling continuously for several days. “I remember coming home and how strong that wind was blowing. I can see the trees go by, you know, but there was no mention of a hurricane. Once home, Paul and his friend John [Buster] Clarke, helped Paul’s father pump out the flooded basement.

Paul said, “Then I remember it started to rain again that afternoon. The tide must have risen at night. It was an afternoon tide. I would say about five o’clock… This wind was blowing; living man, that wind was blowing. And then, all of a sudden, the rain stopped. I guess the eye was gone, you see, and we thought it was all over… And that’s when we all took off.

Paul and Buster heard police and fire sirens coming down the street; they ran to follow them and saw a boat stranded on Great Island. “And so, Buster and I said, ‘Well, damn it, we can get closer than that. Let’s walk over the wall’…and we crossed the Isle of Quigley [then part of the Martin J. Quigley property]. We got out there and watched them try to get the boat down and get people off the boat. By then, the rain and howling winds resumed as the tail end of the hurricane arrived. The boys decided they had better go home.

They crossed the bridge connecting the Quigley property to the mainland and realized the water was at the top of the wall. One of their neighbors, Mr. Pitcher, called them saying, “Boys, you better come over here for a minute. This tide is rising awfully fast. Paul agreed to enter the house, but Buster decided to run home. “He ran around the corner of the house, and the water came up over the wall, and I heard him scream and his feet came out from under him, and he came down the wall with the wave…He went down the side of the house, and he caught that telephone pole over there when he passed by, on the side of the driveway.

Paul’s training as a scout helped him prepare for this emergency as he floundered through the garage. “I found a barrel and some wire. So, I tied the line to the barrel. And I went to the side of the house, and threw him in the current, and let him float to the telephone pole. Buster grabbed it and I said, “Okay, I’ll strap it to the car and you go downwind of the house.” Unfortunately, at this point the car started to float. from the garage.

With the help of other adults in the house, Buster was dragged into the relative safety of the Pitcher house in which the water was waist high. “I remember the [dining] table was floating around. The candles were lit on the table and the table was floating with all the lit candles on it. A neighbour, Doc Roper’s son Edward, came in a rowboat and “we all got out the kitchen window in the rowboat… We were scared to death to go home. We said, ‘Oh, boy, are we going to get it.’

Like any parent, Mrs. Palmer was worried mad. “…and the living man, have we understood that! My mother was having a seizure. She didn’t know where we were, where we had gone.

The 1938 hurricane and Mr. Pitcher’s 1921 Sears and Roebuck home on Willowmere Circle in Riverside played a significant role in Paul Palmer’s life. Paul had always admired the house, and after Paul returned from naval service in World War II, Mr. Pitcher “put in his will that if he died before he could sell the house to me, I would get it by the through his estate at the valuation valuation He was to be sold to me I almost fell over.

Eventually, Paul bought the house and proudly described the many improvements he had made to it, including installing the furnace and the washer and dryer on the second floor. In addition, “I rewired everything in height. Do you see where the base sockets are? [waist-high] Well, I know how hard it can get!

The book “The 1938 Hurricane at Willowmere” can be read at the Greenwich Library and is available for purchase at the Oral History Project office. The OHP is sponsored by the Friends of Greenwich Library. Visit the website at glohistory.org. Mary A. Jacobson, OHP Blog Editor.