Preston’s ‘woman of firsts’ is honored with a blue plaque 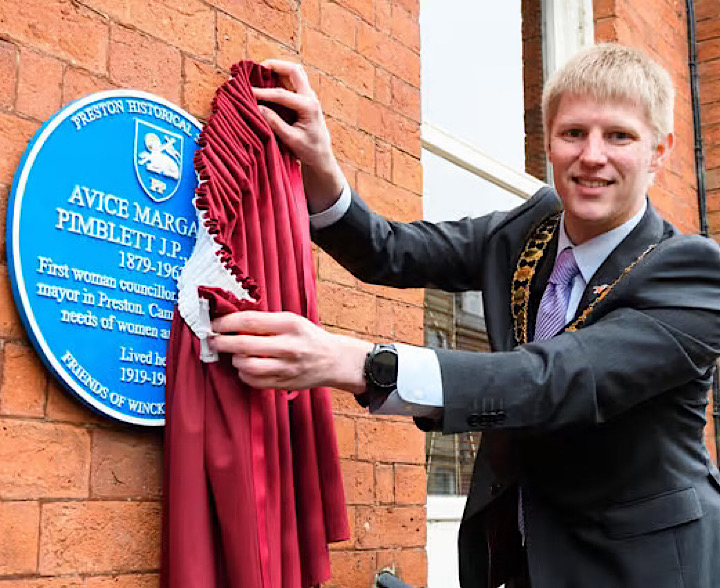 A pioneer of women in civic life and campaigner for the needs of women and children has been recognized at her former home in downtown Preston with a blue plaque marking her achievements.

She also had a major impact on the lives of Prestonians, being particularly concerned with the social, educational and welfare issues of women and children.

The plaque, commissioned by the Friends of Winckley Square (FoWS) and endorsed by the Preston Historical Society, was unveiled in a ceremony at its former address, No7 Ribblesdale Place, in the Winckley Square area.

Read more: A new blue plate for Preston and it’s a world first

The building now houses the offices of architecture, design and master planning firm FWP Ltd. Preston’s blue plaque program celebrates the connections between notable figures of the past and the buildings in which they lived and worked.

Guests at the unveiling included the current Councilor Mayor of Preston, Neil Darby, who conducted the unveiling, members of the historical society and Friends of Winckley Square and FWP staff.

Patricia Harrison, who chairs Friends and is also a committee member of the Preston Historical Society, said: ‘I’m sure anyone who reads the life of Avice Pimblett will agree that it deserves a blue plaque.

“We have worked with the historical society to address the gender imbalance in relation to blue plaques dedicated to women in Preston.

“It’s not just a Preston problem. In 2018, an English Heritage survey found that only 14% of blue plaques commemorated the lives of women. This imbalance has now been corrected across the country.

David Robinson, Managing Partner of FWP, said: “We are honored to have the plaque recognizing the many achievements of Avice Pimblett on our building and delighted to play our part in making this happen.

“As a Preston company, it’s great to mark the history of our town and the life of such a special person in this way. Anyone who reads Avice’s story recognizes that she was a woman of principled and determined woman who has done so much for her people and achieved so many firsts, she remains an inspiration.

The current Mayor of Preston, Councilor Neil Darby, said: ‘It is important that we remember our history and Avice Pimblett was an important figure in Preston’s history.

“This blue plaque recognizes her role as the first female mayor and all the hard work she did for the women and children of the city as it then was.”

Tracey Whalley, practice lead at FWP, told guests at the unveiling: “FWP is honored to accept this blue plaque from the Preston Historical Society in recognition of Avice Pimblett. She was a truly inspiring woman.

Susan Douglass, a member of the Friends of Winckley Square, has done extensive research on the life of Avice, who was also a justice of the peace.

Read more: The Preston Hindu Temple brought the community together for joyful celebrations

Born in 1879, she lived at the address from 1919 until her death in 1963. During her long career in local politics, she worked hard to promote child welfare programs, including a daily wellness center for under-fives.

The highlight of her year as mayor was a three-day party at Avenham and Miller parks in aid of a new maternity ward.

The crowd was estimated to be around 60,000 on the third day, so large that food and drink supplies ran out.

The party raised £6,030, a fifth of the cost of Preston Royal Infirmary’s new maternity wing and Avice laid the foundation stone in July 1934.

You’ll soon be able to read Avice’s full story on the Friends of Winckley Square website.