Tapping into good beer, the wedding industry and software 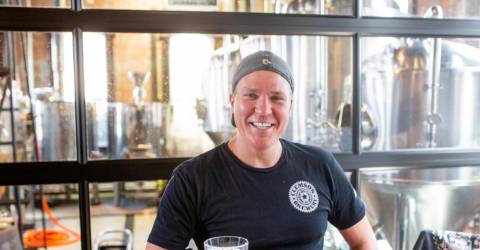 There’s something magical about that first sip of beer straight from the tap, but it’s not as simple as releasing and pouring it. It’s a science and an art, according to the owner of Clemson Bros. Brewery, Kenan Porter.

“There are a lot of variables…but it’s important to make sure your beer is properly packaged, properly stored, and then properly poured…there’s a real chemical element to that,” Porter said.

Known as one of Orange County’s premier craft breweries, Clemson Bros. was established in 2012 and opened its doors in the heart of Middletown’s industrial district on October 8, 2015.

The idea of ​​creating a brewery and restaurant in the former Clemson Bros. Saw Factory was planted by the City of Middletown. Porter, who has a background in beverage distribution, and his brother-in-law Paul, who always wanted to brew beer, made it happen.

Almost seven years later, Clemson Bros. Brewery now boasts a beer list of 23 varieties and offers 12 craft beers on tap, including the award-winning M-Town Sunset, the hugely popular “I Dream of Coconuts”, IPtea (an IPA version of a Twisted Tea) and the essential Clemson Pilsner.

“What’s unique about us is that we also work in small batches,” Porter said. “So our beer is fresh all the time.”

When COVID-19 shut down the wedding industry for two years – to the point that some traditional venues such as Anthony’s Pier 9 in New Windsor closed permanently – Clemson Bros. saw an opportunity to expand its current private event and wedding options. The brewery is currently building its 90,000 square foot warehouse to accommodate larger celebrations. The industrial-chic ballroom space is set to go into construction this fall, with plans to be operational for the 2023 wedding season.

Porter is also developing software for “MunchOut,” a referral rewards program that will provide users with digital currency to use for dining out. When a MunchOut user refers a friend to Clemson Bros. via software, “you’re continually rewarded every time he comes here,” Porter explained. “Your MunchOut account will continue to generate income, even when you are not here yourself.”

Clemson Bros. Brewery has another location in New Paltz, NY (formerly the Gilded Otter), and hopes to resume construction at a new Pine Island location, which was paused after the Covid-19 outbreak.

Clemson Bros. Brewery is one of seven local beer and cider makers that will be at the Black Dirt Oktoberfest at Sugar Loaf, NY on September 10.