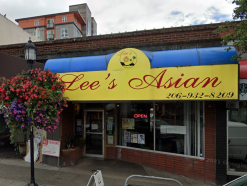 As the 4508 California SW redevelopment project prepares for construction, both restaurants on the site now have closing dates. We have already reported the impending closure of Kamei Japanese Restaurant – which set March 15 as the date a few days ago – and now we have confirmed the plan for Lee’s Asian Restaurant the next door. He, like Kamei, has been at The Junction for 20 years, and Lee’s tells us they’ll close at the end of March. (Thanks to To M for the tip; we dropped by to confirm today.) The future mixed-use building also includes the vacant storefront that previously housed nude pancake. The new development has finished crossing Design Review more than two years ago; it was described at the time as a project of 58 apartments, 12 dwellings, 17 underground parking spaces and commercial space on the ground floor. City permit records indicate that demolition and construction could begin as early as April. This will be the first major California construction project in the heart of The Junction since Junction 47 and 4730 California were built over 7 years ago. (Photo: Google Maps Street View)