The Admiral’s Quarter AssociationTonight’s bi-monthly meeting brought together representatives from two city departments that deal with the bulk of the most contentious community issues, SDOT and SPD – not to give presentations, but to answer questions about everything participants wanted to talk.

The meeting was moderated by the Vice President of the ANA Joanie Jacobs (who becomes president following tonight’s election – more on that later) at UCC Admiral’s Church.

SOUTHWEST SECTOR POLICE: Lt. mike watson opened up asking if anyone had any questions. Jacobs said she was aware of several businesses that had suffered burglaries, including an Admiral restaurant just days ago. What can they do? “Pay attention to each other,” he said, to begin with. The video from the camera is helpful. The same goes for signs such as “this area is video monitored”. He noted that he had been asked at a previous meeting about catalytic converter thefts, so he brought up this stat – 2,120 citywide so far this year – West Seattle is averaging 40 or 50 per month. They can be sold for up to $350. Toyota Prius, Honda CR-V, Lexus RX-400, Honda Element are all popular targets. Don’t try to confront a thief – people have lost their lives doing this – call 911. Someone else mentioned street racing and neighbors who don’t have valid license plates . Street racing should be reported, Watson said, because a regional task force is working on it. Then another person asked about expired tabs. Watson mentioned that they weren’t allowed to arrest people for them. But a parking enforcement officer can cite a parked car for expired plates/tabs. What about the double shot on Alki? The victims both survived, but no one was arrested. From the SPD dashboard, he cited some West Seattle stats — robberies up 18%, aggravated assaults up 12%, motor vehicle thefts up 43%, 105 shooting incidents so far this year. Cars are usually stolen to commit other crimes, he noted. Despite all that, “West Seattle is by far the safest part of town. … You can feel safe here. (He attributes this in part to heavy block surveillance.) One final question: How is the police staffing? “Down from 450 to 500,” he said. A participant thanked Lt. Watson for the excellent service of the officers who responded when he was recently in a car accident.

SDOT: Presented as being there for a “fact-finding mission” was Matt Beaulieu, there to listen to questions. He was accompanied by Danielle Friedman from Neighborhoods Department. First problem, trying to cross the south side of the Admiral. There are no crosswalks for several blocks south of the business district, residents said. A resident near the Admiral Way Viewpoint totem mentioned accidents caused by speeding drivers. The resident who mentioned it has been agitating for traffic calming there for a long time. Another participant presented the graph of survivability at different speeds. Another participant said that the crossing at 47th/Admiral was installed after a fatal accident, but was not considered because “it is in a strange place”. And the radar? Some recent laws could loosen current restrictions on school zones only, “The Photos app is a powerful tool, but you install it and hope it fails” because people stop speeding, Beaulieu said. Friedman mentioned that the recent study of West Marginal Way, blocking off a southbound lane to simulate the conditions of the future protected bike path, really resulted in slower driving.

What do you need to install something? Most of it is based on crash history when deciding where to spend money, Beaulieu said. So to start, make sure that accidents are reported to the police, because otherwise SDOT has no data to refer to. He also noted that they were studying the best way to treat the arteries. And be sure to contact SDOT directly – maybe they can’t help you initially, but your problem will at least be on their radar.

Another question: have there been no fatal accidents since Vision Zero began? Beaulieu acknowledged: “We are not going to zero.” Doesn’t that make things worse? The participant had worked on a school safety committee and called for a four-lane stop, but said SDOT was resistant – yet there are now new four-lane crosswalks through West Seattle High School and Madison College. Aa for VZ in general, Beaulieu mentioned one of the first actions of the new SDOT director Greg Spotts had decreed – a “top-down” review of the program, in hopes of understanding why it’s not working.

Another resident near 39th/Hanford, near a new crosswalk, noted that the intersection has many accidents each year, some knocking out utility poles. Can you put speed pads on the arteries? It’s also an “evolving practice,” Beaulieu said.

Also mentioned – gratitude to SDOT for repaving much of California north of Admiral. (Although there was some confusion as to why a particular block was skipped.) 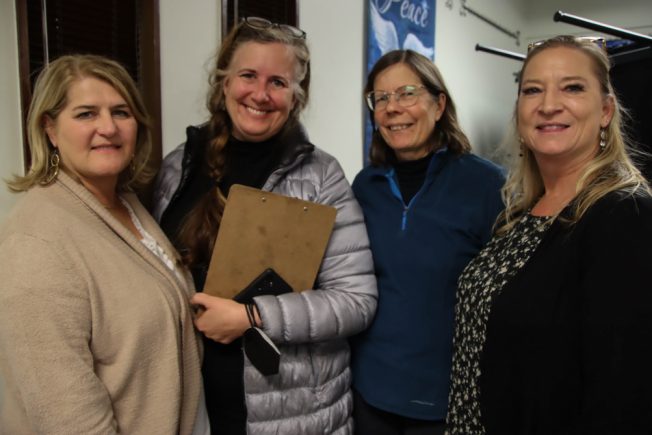 ELECTIONS: The meeting ended with a chance to nominate and vote on leadership for the net year. Elected as head of the ANA in 2023 (and shown from left to right in the photo above):
President Joanie Jacobs
vice president Stephanie Jordan
secretary Carrie McCann
Treasurer Bridgett Markillie

They were the only nominees and were voted unanimously from the list.

(Board members, committee leaders, and an adopt-a-street coordinator are other roles within the ANA, and they would like to have more community involvement.) Voting was open to members, who pay an annual fee of $25 to belong.

PS ANA also offers a business membership program – $50/year – and plans to promote local businesses more actively. Companies donate $25 gift cards for raffle at ANA meetings, and Canteen mission gave one away for tonight – the winner was drawn before the meeting ended.

EVENTS: This Saturday, Admiral Church is organizing a Christmas market (as indicated in our calendar and West Seattle Vacation Guide). West Seattle Land (which Jacobs manages) has launched a toy drive – soon to be in our holiday guide – and donors are getting a discount. She also mentioned the Arbor Festival gala at Brookdale Admiral Heights.

SUMMER CONCERTS: After missing three years for the pandemic and venue unavailability, the 2023 concert series will go one way or another, either Hiawatha if available by summer, or Hamilton Viewpoint. “Our goal this year is THAT IT WILL HAPPEN,” Jacobs promised.

NEXT MEETING: ANA holds general meetings every two months, so the next one will probably be on the second Tuesday of January, which is January 10 at 7 p.m. at Admiral Church (4320 SW Hill). look connecttoadmiral.org for updates.