Where were fresh organic strawberries with hepatitis A grown? Hepatitis A is a human fecal virus 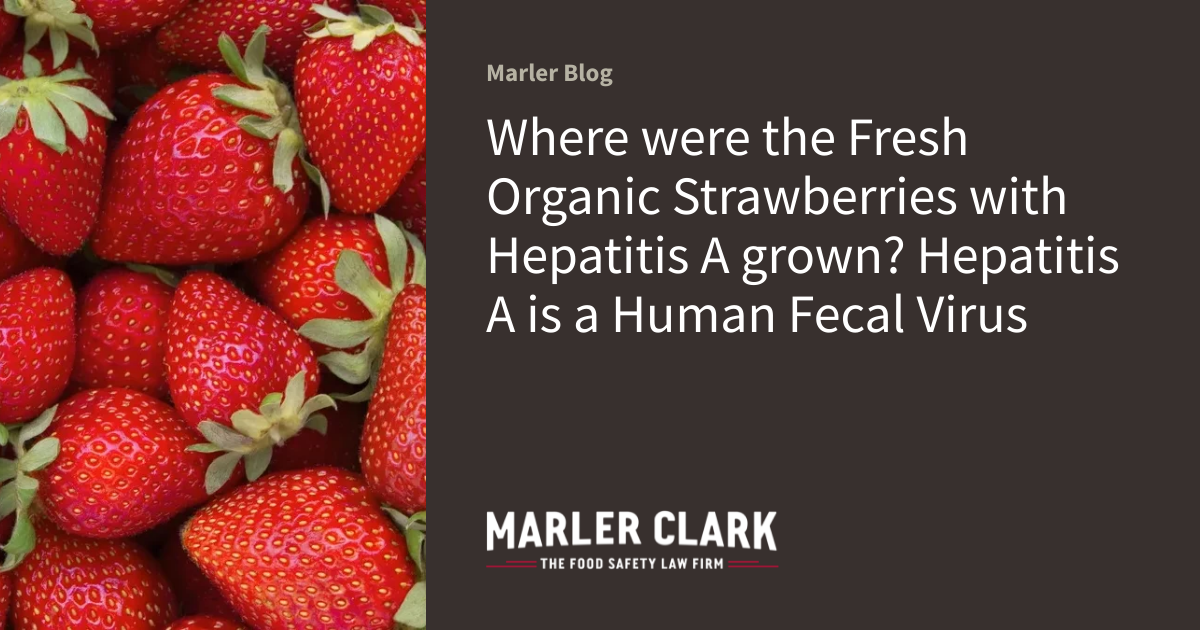 Hospitalizations in the United States: 12 – Canada 4

Provinces with cases: Alberta (4) and Saskatchewan (6)

The FDA, in conjunction with the CDC, the Public Health Agency of Canada, and the Canadian Food Inspection Agency, state and local partners are investigating an outbreak of hepatitis A infections in several states in the United States and Canada potentially related to FreshKampo and HEB brand fresh organic strawberries, purchased between March 5, 2022 and April 25, 2022.

Currently, potentially affected FreshKampo and HEB products are past their shelf life. People who purchased FreshKampo and HEB fresh organic strawberries between March 5, 2022 and April 25, 2022 and then froze those strawberries for later consumption should not eat them. These products were sold at the following retailers, including but not limited to:

Epidemiological and traceback data show that fresh organic strawberries sold under the FreshKampo and HEB brands that were purchased between March 5, 2022 and April 25, 2022 are a probable cause of illness in this outbreak. Traceback investigations show that cases in California, Minnesota and Canada report buying FreshKampo or HEB brand fresh organic strawberries before falling ill. The disease onset dates range from March 28 to April 30, 2022.

What is hepatitis A? Hepatitis A is the only vaccine-preventable foodborne illness in the United States. It is one of the five human hepatitis viruses that primarily infect the human liver and cause human disease. Unlike hepatitis B and C, hepatitis A does not develop into chronic hepatitis or cirrhosis, but in rare cases infection with the hepatitis A virus can lead to more rapid liver failure and death.

How do you get hepatitis A? Hepatitis A is a contagious disease that is transmitted by the “faecal-oral route”, either through person-to-person contact or through contaminated food or water. Foodborne outbreaks are usually attributed to food that has been contaminated by an infected food handler. Fresh produce contaminated during cultivation, harvesting, processing and distribution has also been a source of hepatitis A.

What are the signs and symptoms of hepatitis A? Symptoms usually start about 28 days after infection, but can start as early as 15 days or as late as 50 days after exposure. Symptoms may include headache, loss of appetite, nausea, vomiting, abdominal discomfort, fatigue, joint pain, dark urine, clay-colored stools, and fever. Jaundice, a yellowish discoloration of the skin and whites of the eyes, occurs in most cases. Hepatitis A may cause no symptoms when contracted, especially in children. Infected people usually recover completely in 2 to 6 months.

Hepatitis A: Marler Clark, The Food Safety Law Firm, is the nation’s leading law firm representing victims of hepatitis A outbreaks. Marler Clark’s hepatitis A attorneys have represented thousands of victims of the hepatitis A and other foodborne disease outbreaks and have recovered over $800 million for their customers. Marler Clark is the only law firm in the nation whose practice focuses exclusively on foodborne illness litigation. Our hepatitis A attorneys have litigated hepatitis A cases resulting from outbreaks linked to various sources, such as scallions, lettuce, and restaurant foods. The law firm has filed hepatitis A lawsuits against companies including Costco, Subway, McDonald’s, Red Robin, Chipotle, Quiznos and Carl’s Jr. We proudly represented the family of Donald Rockwell, who died after consuming foods contaminated with hepatitis A and Richard Miller, who needed a liver transplant after eating at a Chi-Chi’s restaurant.

If you or a family member have become ill with Hepatitis A infection after consuming food and want to take legal action, contact Marler Clark Hepatitis A lawyers for a free case assessment. .