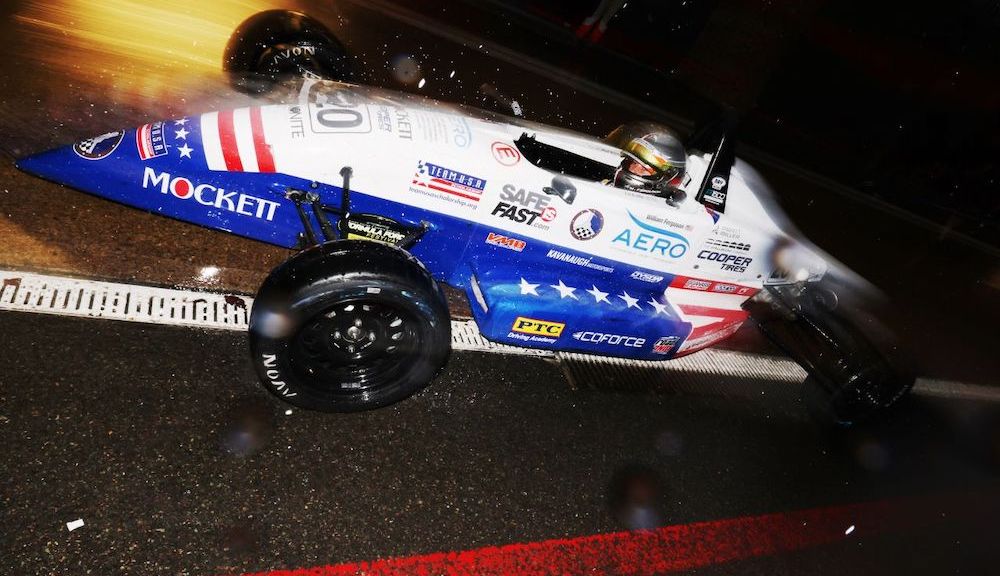 My time in the UK has been amazing so far. He has also been very busy. After all of our pre-Formula Ford Festival testing, which also included a race weekend in Castle Combe, Elliott and I spent a week sharing an Airbnb in the town of Milton Keynes, while Thomas returned home to the United States. United to end his F1600 season… which he did in style. Well done, Thomas!

During this time we were able to do a bit of exploring and sightseeing. We also had the pleasure of attending the final round of the British Touring Car Championship at Brands Hatch. Many thanks to Tom Arron for providing us with media passes for the Sunday event. It was a great moment to watch not only the BTCC, but also the British F4 and the Porsche Carrera Cup. We walked all around the track and enjoyed seeing the ins and outs of the media center on a busy weekend. Being able to view the races from the top deck of the tower was also quite impressive.

We got back to our Airbnb around 11pm that night and immediately passed out. The next day we took time to relax, work on our social media platforms and send some emails. Luckily for us, the house we were staying in was only a short walk from the nearest train station. So on Tuesday and Thursday morning we got up pretty early and headed off to London. It was such a cool experience. With so much ancient architecture, the city is rich in history. We spent most of our time wandering around the Soho area, where it was amazing to see so many classic shops, pubs and restaurants. By simply exploring the city on our own, we saw what an average citizen might see day to day. I think we really had a good taste for British culture.

After spending a week exploring and regenerating we headed to Donington Park for the final rounds of the GB3 and GB4 seasons as well as the British GT Championship which included G3 and GT4 cars. It was great to see our fellow Americans Bryce Aron and Max Esterson, both former Team USA players. It was two great days of racing, with clear weather and great battles in GB3. Being at Donington was an experience in itself, a legendary track that has been around for almost a century. Thank you, MSV media, for having us!

The following Tuesday we returned to Brands Hatch. This is such an awesome track! I drove WeatherTech Raceway Laguna Seca and thought the corkscrew was steep but that’s nothing compared to entering Paddock Hill Bend! Wednesday the weather was perfect and we had a full day of testing in dry conditions. The day went very well and everyone in the Ammonite Motorsport team immediately showed good pace. Thursday and Friday brought wet and semi-dry conditions which was great as it gave us experience in many different scenarios.

Come Saturday, I was drawn into Heat Four, which meant we were the last group on the track, and by then the track was pretty much completely dry. Each qualifying session was supposed to last 12 minutes, although our session was reported at around nine minutes. At that point I was on pole position but once we got back I couldn’t find the rhythm and finished third for qualifying. It was a little disappointing but we were still well placed for the first race. Unfortunately, that momentum didn’t last long and on round three coming out of Druids, we were kicked into the barriers.

My mechanic, Luke, did an amazing job getting the car back in place and ready for battle on Sunday. Because of the crash, I didn’t automatically reach the semi-final and had to start ninth in the progression race. By then the rain had returned, but by the end of the first lap I was up to second place. Once I rounded the leader, I was able to build a gap of over seven seconds before heading home for the win.

I hadn’t come out of it yet, I still had to finish in the top 12 of the semi-final to reach the grand final. Started 25th got off to a really bad start and fell to last place 30th at turn 1. It ended up being one of my best car races yet as I finished the race in 10th place after 12 laps. I was so relieved and so happy that I was able to make such a comeback after just three laps in my Heat race.

My result meant I would start 20th for the Grand Final, so I had a lot of work to do. As the rain clouds got closer and closer, we ran a wet setup on the car in anticipation of the wet weather. The first three laps of the race were dry and I still managed to climb up to 15th position. That’s when the rain came with a vengeance. It was so bad they had to flag the race, plus it was getting dark. It was quite a shame because we were in a perfect position with our setup and 16 laps of racing still to go, but there wasn’t enough time before dark for the race to resume.

Big shout out to Max Esterson for the win, he was also racing with Ammonite Motorsports.

It was great to spend the week with such a solid group of riders and with a great team. Ammonite Motorsports killed it all weekend and I had a great time with everyone. Thank you so much to Team USA and all of our supporters for making this all possible. I am so grateful to be able to represent the stars and stripes at two of the most prestigious races in junior open wheel racing. Now all attention is on the Walter Hayes Trophy where we will be even stronger.

Also, we had the opportunity to visit the Haas F1 factory yesterday. It was interesting to see the ins and outs of transportation for a Formula 1 team. Mark Lowe, our guide for the day, was incredibly knowledgeable about the car and everything it takes to run a successful team. We were incredibly lucky to see a few fenders and floors up close and being repaired, as well as seeing the 2019 car being readied to be sent to team owner Gene Haas in the States. Thanks to Jeremy Shaw, Mr. Lowe and Mr. Morrison for organizing a great day. It was a perfect way to unwind after a long week of racing.