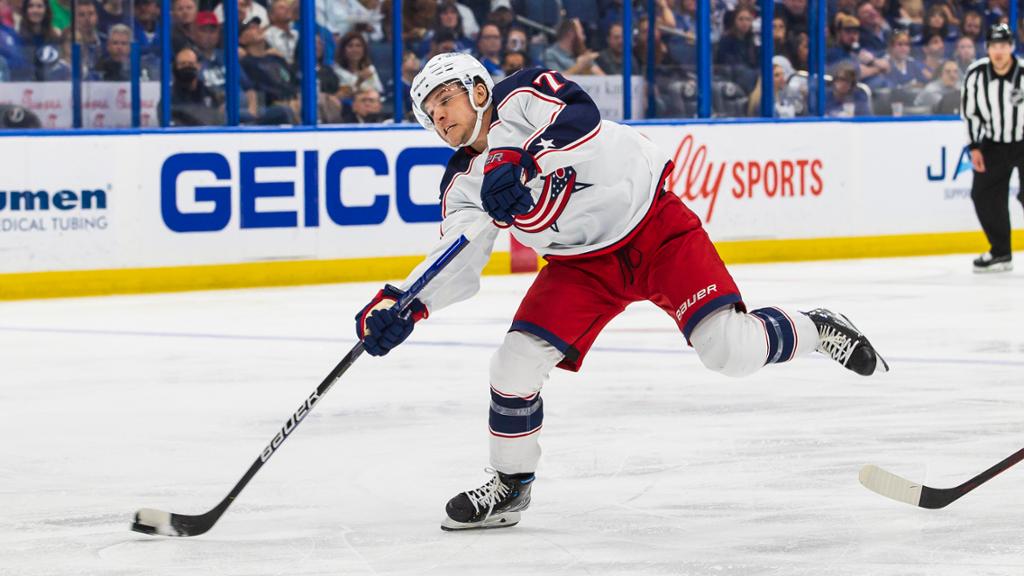 Nick Blankenburg writes a blog for NHL.com while the Columbus Blue Jackets are in Finland for the 2022 NHL World Series this week. The Blue Jackets take on the Colorado Avalanche in regular-season games at Nokia Arena in Tampere on Friday (2 p.m. ET; NHLN, SN, ALT, BSOH, SN NOW) and Saturday.

Today, in his third installment, the rookie defender talks about his rest day in Helsinki and open training in Tampere on Thursday.

This trip has been great fun so far, but it’s gone by really fast. We are already halfway through and the next few days, with the games, will pass a little faster.

We’ve only been here a short time. We took the train from Helsinki before free practice this afternoon. I think it’s a pretty cool hockey town. Reminds me a bit of Columbus. You get off at the station and there is only one main street where everything flows. That’s kind of how Columbus is too.

The hotel is attached to the arena where we play, the Nokia Arena. There is a casino attached to the hotel and me and some guys could go there after dinner. We’ll see what happens. We haven’t really decided what we will do.

The hotel is really nice. I heard some of the guys say that some rooms have saunas and you can watch the game from your room as the hotel is attached to the ice rink. I don’t know if that’s true, but it would probably be one of the coolest things to be able to watch a game from your hotel room in a sauna.

Speaking of sauna, we have to go today. We fell asleep for a bit and went to the sauna with a few other guys and took a train here and then got here and went straight to the ice rink.

The sauna was great. I’m a big ice bath and sauna guy. Back in Michigan, we would always go to the sauna, then run to the ice bath and go for a minute, full body, then back and forth. So that’s obviously what we did yesterday in the big sauna and then we jumped into the Baltic Sea. We probably hopped there five times and kind of went back and forth.

I mean, I love saunas in general, and then being able to jump into the ocean was amazing. I wish they had more saunas in the US. I think it’s an underrated thing that people don’t really realize how good it is for your health.

We had practice today, open practice, and it was great. I felt good there and I think I’m ready to play tomorrow for my first game after getting injured. It’s great that it can be in a game like this.

The time change still bothers me a bit, I have to be honest. It’s weird, I went to bed last night and fell asleep around 9 p.m. and woke up at 12:30 p.m. I was like, “Oh no, that’s not good because I’ve only had three hours of sleep and I’m wide awake.” I ended up checking my phone, which I shouldn’t have. I should have tried to go back to bed. And then a friend called me and he said, “What are you doing?” And I’m like, “Well, I’m in Finland.”

I don’t think we’ll go to the wing, Hook Restaurant, which Patrick Laine told us about it. I went there when I was here for the world championship (IIHF) last year. We’re eating next door, so maybe I’ll stop by and grab some wings. Just a little bit.

It will be early evening. I might read a little or watch a Netflix show and then go to bed.

Tomorrow will be exciting. Obviously Colorado is a good team and we have something to prove, so it will be good to get out there and go.